That’s right, it’s back.
Here is a pretty rough version of my favourite 50 songs of my life. Depending on who you are, you likely have heard of none of the bands. Don’t worry about it. Actually, nevermind. Worry about it, and look each of them up on iTunes and buy their music.

It goes in order from least favourite to most favourite, so #50, the highlighted one, is the best one, in my eyes. My favourites from 1 to 10 are pretty concrete, not much room for moving around. Then from 11 to 40, they get pretty rough, there could be one in the high thirties that could easily be in the low teens, but that’s just how it works. Then from 41 to 50, it is pretty concrete again. It was hard, it was life changing, it was beautiful. I recommend you do this yourself, with your own music, and then listen to your playlist while sitting alone in your room. Unbelievable.

I have a few rules for the activity, which I broke numerous times:
1. Only one song per album. I was originally going to do one song per band, but that is just silly.
2. Michael Jackson should never seriously be put in your top 50.
3. The Beatles should not ever be #1.
4. Be honest.
5. Yours will not be anywhere near as good as mine. But you’d likely say the same thing. 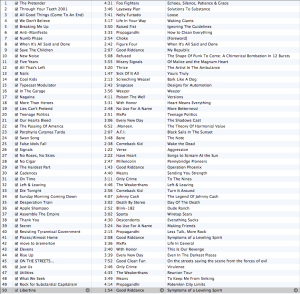