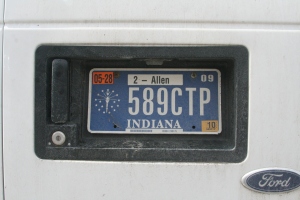 I’ve taken a picture of a license plate in every state I have been to this month. So far I have eighteen photos. So far I have no idea what I’ll do with all these photos, but the idea seemed inspired. I like knowing where I’ve been. Living free, capturing photos of those moments, so when I inevitably slow down and get a job (for a while) I’ll have something to remember the month of April, when I visited over twenty new states and critiqued twenty new license plates. So far my favourites are Indiana and New Hampshire. Indiana because it looks rad. New Hampshire because of the state motto on the top of the plate.

Live Free or Die. Before I go too far, I’ll admit that I don’t know much about American history, and that maybe New Hampshire has a reason for such an absurd motto, like it is Bruce Willis’ home state, or during the War of 1812 every person in the state chose death by getting run over by a horse carriage rather than some sort of British captivity. But it seems to me like some soldier wrote it in an emphatic toast about battles and death.

The word ‘Freedom’ is like the word ‘Love’ in English, in that they both have become tired and worthless through overuse. People dream about love like it is some cheap movie-like feeling where your stomach burns and your loins twinkle and ‘you just know’, when it is actually nothing more than friendship, understanding and tolerance. People talk about freedom as if it is a state of being, achieved through government and wealth, when it is actually nothing more than the ability to make decisions without hindrance or restraint (any sort of government seems to hinder in the first place…). It is achieved through an understanding of the mind, not through fighting wars or unlocking cages. If you have an incorrect understanding of what freedom is, then you surely can’t be living free.

And according to New Hampshire, you might as well be dead.

2 Comments to “Live Free or Die”