Salt on my wounds.

Men used to fight and kill over supplies of salt, that is, if my knowledge of history is correct. But today my shoes are saturated, crystallized, firm and full of gravel because the city believes that salt and gravel in super-quantities increases sidewalk safety. The streets and walkways are painted and speckled white, salted like fastfood fries.  I have never bought salt, and maybe never will. I always steal salt from my roommate’s Windsor salt box to put on my rice and dal, and if I’m not careful he’ll probably kill me for it. Some things never change. Oil is the new salt, and someday we will find an alien planet to harvest all the oil we need to further destroy our own, and while killing the inhabitants of a foreign planet instead of a foreign country we will wonder how we ever paid $1.259 per litre and how we ever killed innocent people to get it. We could have just been killing aliens. If there were one ‘spice’ I could live without on a daily basis I think it would be salt, although I know it is used for far more than just sprinkling in soups. May the cumin keep coming and let the salt someday halt.

There are so many ways to conjugate a verb, more ways than are even understood. Since July my French grammar has far surpassed my English grammar, so maybe I should be writing this in my second language because according to my engineer editor, my grammar needs work. I write things like this on my hand to remember the difference between conditionnel passé and plus-que-parfait. Drawings help too, they are the salt to flavour my hand. My hand looks like this at the end of most days. 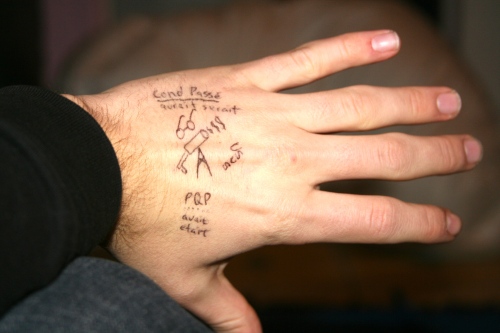 I have since added a book, the word ‘devoir’ and a hockey stick. I credit French to teaching me more English grammar than did my first 12 years of English school. The only thing I learned in university English is how to properly use its vs it’s. It’s easier than you think.

After a weekend of high voltage hockey excitement, my life is back to its regular salt-free diet and routine. And as I read about the lives of friends and as my French class becomes more bland by the hour, I realize why people killed other people for salt. Because their dry, tasteless lives demanded it.

2 Comments to “Salt on my wounds.”