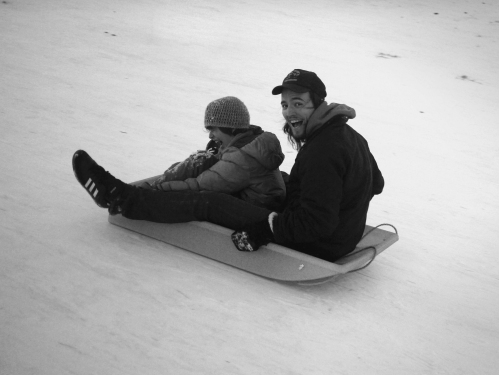 I went tobogganing on a Sunday afternoon. In true Saskatchewan fashion, one of the two best spots for sledding in the city is a large ditch next to a deceased Walmart. The best spot is the city’s original garbage dump turned into picturesque, rolling hill. After four or five runs of straight forward sliding, the under-ten-year-olds and I decided that backwards would be the ultimate thrill. We performed this several times, alone and in teams, and, as we expected, the thrill was extreme.

I applied the backwards logic to my life: I wrote a book, and only now will I return to school for formal English training. And like a traditional student I will then use the royalties to pay for tuition. (This means I need to sell something like 1000 books at the current price.)

I am what is wrong with the world. The guy that writes a book because he can, gets it published by a website and sells it out of his parents’ home. Typing the sentence makes me crumble in embarrassment. There is a book written that was recommended to me entitled ‘The Cult of the Amateur’ by Andrew Keen that I have not yet read (the fact that I am presenting this book in my blog even though I have not read it proves that I am the amateur he speaks of). This book studies, as far as I’ve understood, how the internet threatens to take away the artistic achievements of the past through file-sharing, user-generated free content and through allowing the layman to create at will. Our vanity tells us that the world wants to hear what we say and see what we do, and the internet gives us a domain to do this in as many ways as we can think of. We will pay for these advances.

I may be returning to a university, but it doesn’t mean that my ideas of formal, institutional education have changed. The reason I am taking a single class is because I don’t see myself continuing my education with any seriousness. The idea of it all still blows my mind, and the fact that I will be out several hundred dollars to have one lady tell me what I already know, that my writing sucks, and to have ten other students think the same thing but not say it, makes me consider blowing the whole thing off. But because it seems worth my while, and because backwards is the new sideways is the new forwards, I will likely indulge.

Although not always the wisest of decisions, being damaging and irresponsible and often selfish, going backwards is always more thrilling than the conventional, seat-belts and eyes forward, one step at a time mentality. I am ruining the world for it, but I am obviously alright with that.

See you in the halls. I will be humbled.