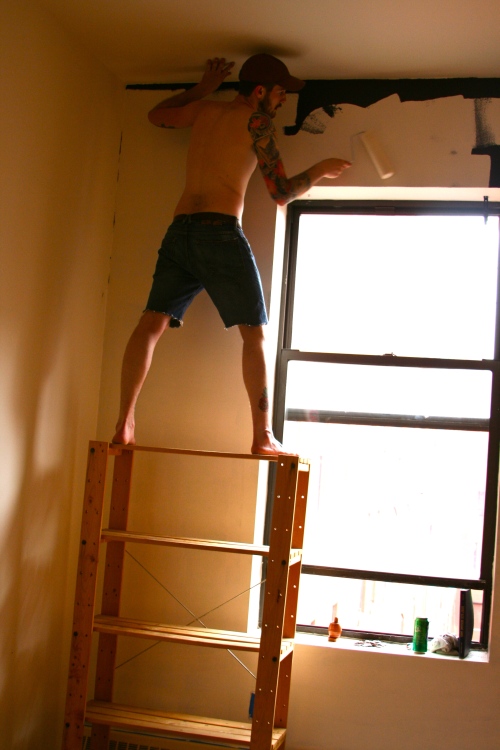 I have never owned a home, though I am in an age where my peers are all deciding that such an investment would benefit them. I find this admirable. Home ownership is something I aspire to greatly, but something which I know with certainty that my immaturity and late-bloomingness make me currently wholly unprepared. So instead I rent. There was a moment in time where I said I would rent comfortably for the rest of my life. I have since revoked this idea, as living in a home with zero roomates and no landlord (except for the bank) sounds somehow pleasant. My views of the following are likely to change in the same way.

A married couple and I have been having a long-standing debate. This is a debate, to be sure, because both parties are so stubbornly rooted in their belief that no one will change sides, that is, until ten years down the road when I get married and see the lightly-tinted Kokopelli Teal and finally understand how a colour seems to understand my innermost being. I believe that painting the walls of a home or apartment is a painful waste of time and money, and though the debate will remain insignificant forever, the internet is rampant in even less stimulating debate, which therefore legitimizes The Paint Debate. Somehow.

To state that the flat colour of the wall of a home can even begin to express the personality of a human soul is a degrading to the complexity of personality, which with every individual person would require more than the several thousand shades offered on the Benjamin Moore paint chip section. It would require millions of ever-changing colours; colours that don’t yet exist. The architecture and interior design of a house (if considered art), like the composition of a painting, has thousands of colours and strokes and accents and features that can hint at the surface of a personality, but in no way fully capture the intricacies and oddities of a person. You are not what you own, as Fugazi put it. You are not the colour of paint in your home.

To state that colour has the ability to change a person’s mood may be a good enough reason to surround yourself in Baby Chick Yellow or the dignified Gibralter Cliffs Grey, though this may hold true only for classes of people who have nothing else to worry about besides superficial interior decorating decisions or choose to paint walls repeatedly to help them forget of their mounting debt. There has undoubtedly been some conclusive research conducted by an authority in psychology stating that certain colours release endorphines and thus, painting a room of a home will guarantee happiness. Similar psychology has been taken up by colonialist governments to bring joy and happiness to the groups of people that they previously assimilated and murdered, and hey, that seemed to work well.

To claim ownership by way of paint on a wall is an illusional attempt at false ownership. It is evident that a human being purchasing a home will instinctively paint the walls regardless if the colour is something they would like in another context, and this is the Dog Piss Complex. Dogs will urinate on things even when they do not have to urinate, dribbling drops onto a fence or hydrant in a primal game of grafitti, simply to make more things their own. Humans have civilized ways of pissing on property, and thousands of colours of piss to choose from. Besides all this, simply put, ownership is a false dream. Possession is nine-tenths of the law, they say. But to have ownership over something, besides some twentieth century discipline system, is nothing. Ownership is a form of entitlement. A person’s home is no more theirs than it is mine, besides a magical thirty-year digital transaction or physical currency swap. Besides the fact that I would get arrested for attemping to enter it on my own will, and besides the fact that I might be sent to the hospital, mental or otherwise, for painting it myself. Claiming ownership of four walls and a roof is as misguided as claiming ownership over the air that resides within those walls. Painting those walls to mark territory, then, is ineffective.

To protest living in apartments of drab white walls, to make a statement by painting walls elaborate colours, is something I can support. Change for the sake of change is something I can support. But when change is done in the name of personality, of ownership, of permanent mood-boosters, then I lose interest. Because then reason is out the window, and some bizarre cultural rite of passage comes into play. Adulthood or something.

All this to say that I have yet to find a reason that I myself would take the time and financial discourse to paint the walls of my dwelling, and that I have a difficult time understanding those that do. There are indeed colours that I prefer over others, this is normal. But to base decisions or pocketbook numbers on these colours, even if they invoke the warmest of positive feeling, is not worth a person’s time. I’d rather sit here for three hours and write a piss-poor essay than waste my time rinsing out brushes and taping floorboard with green tape. The theorized, marginally-improved mood brought by the finished product would not offset the 100% worsened mood caused by mere seconds of the painting process.

I do not consider it wrong, dumb, superficial, or negatively adult, I just find it as another case of myself not understanding human habit or what has grown to be the norm.

I think I’m afraid of committment.

And everyone sits patiently as they wait around for me to grow up. 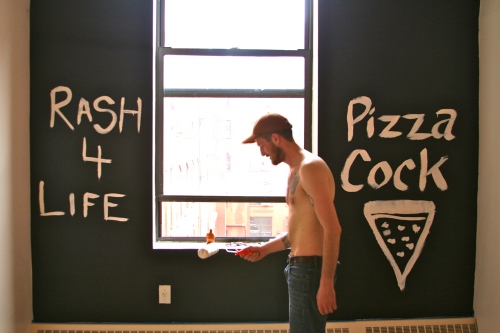