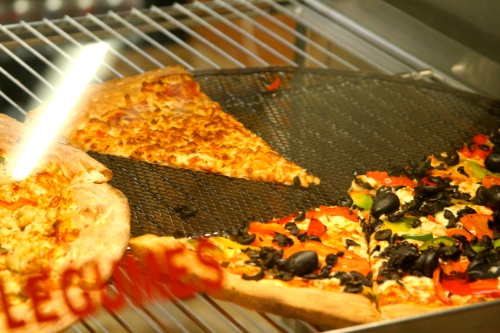 Disclaimer: This is not pizza from Vera Pizzeria. This is scummy Montreal metro pizza, which also has it’s place.

I have oft dreamed of a world free from the bondages of currency. The ‘bootstraps’ analogy that no longer makes analogical sense would neither make societal sense because people would all have the same strapless boots, the same homes, and the same neapolitan ingredients in the fridge. Where no matter how hard you work, you get a piece of the pie. The pizza pie.

I have oft dreamed of a job that pays me in pizza and beer but until recently I believed it was an impossible, utopian dream. I have found said job. I wear an apron, I swing my hips liberally to the hook-heavy anthems of Jenny Lewis, I spray, scrub, soak, sort, and airdry the cheese-grimed pizza plates of Vera Pizzeria, home of the finest pizza your pedestrian tongue (and undoubtedly mine) will likely ever taste. Contrary to my communist, currency-free compulsions, on busy nights where my free labour has been deemed as moderately necessary, I work hardest and get paid the least, a perfect microcosm of capitalism. In the name of that covetous progress, the human-crushing runaway train that it is, they have sourced a commerical dishwasher. And with the simple stroke of a pen, with the lease of a stainless steel washer that sprays with the intensity of a pissed off geyser at 150degrees centigrade, I have become obsolete.

So with my severance package in hand (a bout of scurvy in my organs from a pizza-only diet), and my travel backpack on my shoulder, I will slither towards an early retirement. Savings were significant in the height of the pizza game, and my investments were sound, so with the wealth of a nation, the tropics call my name. I have long desired, for three years or more, to leave my home to see the homes of others, and now, ticket for Thailand securely in hand, visa for India theoretically in transit, this retirement dream will soon come to pass.

I pack my belongings, patch the holes on my backpack, google trip plans when flashbacks of swimming in the ocean, drinking five-cent chai, eating dogmeat bring excited memories of the learned parts of travel. Then flashbacks of sweaty, anxious, late walks on the beach, the embarassed purchase of tacos from women squatting in the alley across from the department store, feeling responsible and justified when I get attacked on several occasions strike my memory.

Hold on a second. People’s dreams change? Without them even knowing it? Until it’s too late? Well that’s some merited bullshit. Some ironic piece of formaggio pizza, light and bubbly crust on the outside, black and tarry on the inside. I’ve already bought a one-way ticket, already dreamed of the exploits and adventures of the trip for three years. Like a soon-to-be-wife with cold feet, always dreaming of the day she’d get married, but when the vows are written and the dress is tailored and the family has flown into town she realizes that this dream was what she wanted when she was 19, not 29. But she goes through with it anyway because, she figures, it’s still what she wants.

Much has changed in my brain in the three years since I last was in a territory that I was not welcome. For example, I have learned that I have always lived in a territory that I was not welcome; The Dominion of Canada. I have learned that as a person of privilege, I am ignorant and blind to my privilege unless someone calls me out on it, and even then I’m likely too stupid to comprehend it. I realize that abusing this privilege by flaunting it and spending its savings unwittingly, I disrespect those who have no privilege, even if I attempt to be ‘socially responsible’ while I do it.

I am willingly throwing myself into a situation to inevitably become the type of person I never want to be. As if I decided to run in party politics, or get season tickets to the Toronto Maple Leafs.

The tenets that I used to hold dear and romanticize about my lifestyle—the learning about culture, and seeing new things, and helping where I can—now come off as paternalistic blather. I am a product of loving parents that worked hard to give me everything I ever needed, which, along with the technologial and economic progression of the west, has turned me into a skilless rube whose only ability is to pick up and go. As a ‘writer’ I use this as ‘inspiration’ for ‘projects’ and ‘essays’.  Previously my impulse was to I enjoy flaking on the lifestyles and traditions of groups of people far from my home that have been adversely flaked on by colonial forces for hundreds of years. Now, I’d prefer to do so at home, by myself, in a rundown house in small-town Saskatchewan where I can negatively affect only the people nearest me.

I look forward to coming out of early retirement to rejoin the workforce and finally stop perpetuating the types of relationships I have come to realize as unbalanced and unfair. I look forward to squatting in a moldy, infested apartment, dressing like a true dishwasher thus embracing the motto, “Dress how you want to be addressed” and forever scrubbing the cheese off of pizza-related tools, all for the simple reason that I am too unintelligent to understand how to truly live in balance with other people, so I’d rather just rot.