The following was first released online by Briarpatch Magazine, selected as Best of Regina entry in the 2017 Writing in the Margins contest. 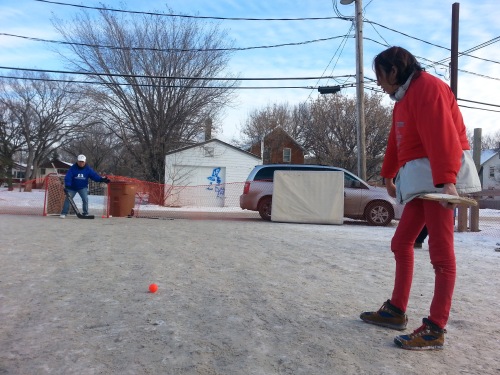 “Hey, come over Saturday and we’ll watch the Canadiens play the Leafs. That’s my team! The Leafs,” Ivan tells me.

“Do they play each other this week?” I ask.

“They play every Saturday.”

I arrive at Ivan’s the following Saturday, ready to microwave each of us a bag of popcorn.

I turn on his tube television which sits at the foot of his single bed in the living room. Ivan lives on the main floor of an aging building across from the casino – one of those apartments where the landlord slaps on cheap laminate floors like bandaids to justify a 30 per cent rent increase. Next to the bed and in front of the TV is a recliner that I always encourage him to relax in instead of slouching on the sagging edge of his bare mattress. I’ve never once seen him sit in it. Next to the recliner is Ivan’s walker. One of the brakes doesn’t work.

Maybe when Ivan was younger Toronto played Montreal every Saturday, when there were only six teams. But it turns out they don’t play this Saturday. Instead, country music videos prattle on in the background while Ivan drinks from a bottle of port wine and I wheel back and forth on the seat of his walker.

“Oh yeah I used to play. In White Bear. We’d play in Carlyle sometimes. Home of the Cougars. White Bear versus them white kids in Carlyle, haha. You know, we weren’t half bad.” He winces at some painful on-ice memory tied to growing up in a province that is unforgivingly racist. He jokes about being a bit fat in those days, now he weighs half.

“I’ll pick you up on December 31st for Hockey Day at Carmichael,” I tell him as I leave.

“Love you brother. Lock up behind you.”

Sheldon stands at centre ice, eyes closed, visualizing his upcoming slapshot. Noel, the goalie, affectionately known as Ken Dryden, waits with knees bent as much as his battered femur allows. The crowd heckles from the side boards.

Hockey Day at Carmichael is a pick-up street hockey game played on the uneven, certainly dangerous parking lot of Carmichael Outreach, a crumbling drop-in centre in downtown Regina. On Hockey Day, members of the Carmichael family of hundreds, many of whom happen to be without homes, come to play shinny and eat a hamburger.

“Hey, Lenny! Keep your stick down, and stop saying ‘fuck.’ There’s kids around!”

Hockey Day is the only sporting event I’ve heard of where the inebriated and unskilled are encouraged to play. Where new renters can come and settle scores on-ice with their cousins who won’t stop trashing their apartment. Where those still healing from the abuses suffered in the residential school system can come and grind through their aggression. Where people who get ticketed in the mall under the city’s “unwanted guest” initiative come to forget the mall exists. Everyone is welcome to play.

Deano chases the puck into the corner, hits a patch of ice and lands on his face. He is escorted to the spectators’ bench for having one too many and is given a coffee, a smoke and a cheer from his teammates. Thirty people show up to play, another thirty to watch. The Lemieuxs and Leaches chase the ball with donated jerseys pulled tight over the five layers of jackets that are obligatory when one lives outside and sleeps at Sally Ann or Detox.

Ivan doesn’t make it as a spectator this time. He just got out of the hospital and being a spectator means sitting outside in the winter on a hard chair for three hours until burgers are ready.

“I knooow, I know. I still can’t figure out how I got pneumonia.” The week before while Ivan slept, some guests unhooked the smoke detector at his apartment and left the window open all night so they could smoke. “I never even left my bed!” Home care from the health region was supposed to start coming a month before but when he didn’t answer the door once, they permanently discharged him. When so many pieces of the health care, social assistance, and justice systems function in the same defective way, it points to the fact that these are purposeful features, rather than flaws, in the process of colonialism, designed to betray urban Indigenous people.

Ivan wheels himself into the kitchen, fries a pound of bacon, butters two slices of white toast and brings back our feast spread on two decorative plates on the stool of his walker.

“That’s my team!” Ivan says as the Canadiens walk from the dressing room at the NHL’s outdoor Winter Classic. We’d made a plan to watch the game, this time one that we knew was actually happening.

Ivan squints hard at the TV, at times mistaking the white and blue vintage sweaters of the Habs for the black and yellow of the Bruins. He needs glasses, he’s asked for them several times himself, but whenever he has an appointment to see any medical professional he refuses to go.

Montreal dominates Boston in a game of shinny not unlike Hockey Day at Carmichael, except the 80,000 spectators are drunk in some apparently socially acceptable way. He remarks on Carey Price, the world’s greatest goalie, who sits on the bench with a bum knee. Ivan knew the feeling. He recently had a broken upper tibia and a full-leg cast for eleven weeks, half of which he slept at Party Tree, an empty lot furnished with a plank of wood and two broken office chairs.

“You should see my grandpa’s rink in North Weyburn. Best ice in Saskatchewan,” I tell him. “Sometimes I go there to skate just to get rid of stress.”

“Oh, for sure. Weyburn, hey? The Red Wings!” he says, referencing the junior hockey club. “They’re a good team. But the Bruins, now that’s my team! Estevan. I lived there eight years. You’re my Estevan Man. I bet I know your family down there.”

He lists distinctly white surnames. I don’t have any family left in Estevan but since he found out I was born there we never stop talking about the place.

“I’d walk around with a wagon picking up empties. Ho boy, I’d make a lot, haha. No one down there doing it then. I wasn’t drinking then, could make $60 a day. Could see Boundary Dam from my place.” Ivan sits on his bed, arms crossed, blinking at the TV, wearing an Estevan 1985 Heritage hat I found him for Christmas. The coffee table next to him is littered with insulin pens, empties hiding under his bed. He’s lived in this apartment for three months. Before that he lived nowhere.

“No guests at all,” Ivan responds in agreement to my suggestion of having no guests after 11 p.m. Too many guests means noise complaints and an empty fridge. He just got out of Medical ICU.

“Whatever you want,” I say. “And the other part of the agreement is our part. We, as your support workers and friends, agree to respect your privacy, help you get groceries, do laundry, y’know, the stuff we already try to do. And we agree to take you out for coffee once a week. Get you outta your place.”

“I was thinking of getting us tickets to a Pats game. Maybe against Brandon,” I suggest. Ivan spoke of Brandon, Manitoba, another former home, on a daily basis. It was where he and his mind went when he tired of Regina.

It takes us a week to print the agreement — an attempt to keep his place safe and quiet and keep him housed. It takes another week to laminate it. By then he’d had guests and was in and out of the hospital again. He never did sign it.

There’s an ambulance outside his apartment as I drive past, so I stop and let myself in with my keys. A paramedic is holding an intravenous bag that runs into Ivan’s arm while Ivan sits eating his first meal in three days, microwaved by the paramedic himself.

“And who’s this now?” asks the paramedic.

“Oh good,” he says to me. “He needs to make sure that he takes his insulin for sure the next day and a half, or he won’t make it. But he can’t take his insulin without eating.”

He speaks as if Ivan can’t hear. “I’m surprised he’s still kicking. Last time we saw him we were taking bets as to how long he’d last. Glad he’s got some help. If not, these kinds of guys would plug up the system.”

The health professionals place bets on his existence and call him one of ‘these guys’. Six months later the health region that employs them releases a job posting with blatantly racist language, then rescinds it and claims that racism is not an inherent issue within their institution. I begin to understand why Ivan skips every possible interaction with medical professionals.

The paramedics get him to sign a release stating that he is not willing to come with them to the hospital to get checked out.

“Ivan, do you have any other health concerns we should know about?” they ask.

“Yeah. I’ve got rabies.” Ivan says with a pause, his face earnest. The paramedics look at one another, unsure of what to say. Ivan laughs at them and they leave. Ivan finishes up his microwaved fettuccini alfredo.

“Hey bro, should we have some tea?” I say yes and go to the kitchen to find the coffeemaker topped up with teabags and the coffeepot already filled with warm tea. I grab the last mandarin orange from the counter, and he and I sit and watch the news and hockey highlights. We drink day-old tea, eat a few orange segments, and as I leave, we exchange our pleasantries one last time.

“Lock up behind you.”

I go home and grab my skates and head to the outdoor rink. I skate until my lungs burn, my legs noodle. My head still feels like there’s a bench brawl going on inside, so I skate laps until my head feels nothing. And then I skate more.